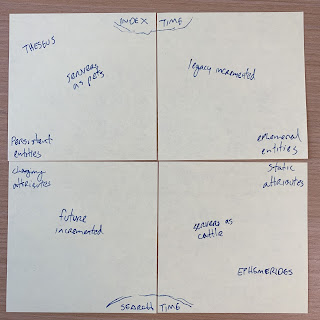 Quadrant models are useful organizing tools. Let’s use one to look at the problem of managing the attributes of entities in systems visibility. I’m not expecting to solve the problem, just usefully describe the playing field.

Let’s start with the old school entities model. Once upon a time managed computers were modular, high value devices. A server or desktop would be repaired or upgraded by replacing components. If its use case went away, the device would be repurposed to another use case. It did not vanish until accounting was certain it had fully depreciated and could be sold, donated, or scrapped. This state of affairs persists at the high end, so it’s still worth considering. Someone’s racking and stacking some pricey hardware to make things go.


The computer (let’s call it THESEUS) has a timeline of footprints. Business Analytics teams can see it in their Enterprise Resource Planning (ERP) systems, contract tracking, and accounting systems. Facilities knows it by its power draw and heat load. Security Operations has interest in it, and their agents come and go with the vicissitudes of fortune. Lights On Doors Open (LODO) Operations cares the most about it, and tracks it closely as it serves each purpose of its lifecycle.

Each group’s view into the computer’s function is limited by their immediate needs. Most of the time, various teams are happy with their limited view into this entity. They are able to set any needed attribute to entity mappings at index time, when data about the device is collected. Changes don’t much matter, and can be manually updated or ignored.


This works until change spills over between groups: for instance, if a missed recall for a faulty part leads to a hardware failure that starts a fire, Facilities and LODO will be equally interested in how they could have better coordinated with Business Analytics functions. “Where was this ball dropped?” The answer is often “changes in reality were lost because we don’t keep proper track of entities.” Of course no one states it like that. Rather, they say “we received the recall and sent it to the point of contact on record.” This scenario plays out in security as well, when incident responders can’t find out if an attacked device is safe to restart, or when a monitoring tool alert is how they learn that DevOps is rolling out a new service. These misses in visibility drive folks towards mapping attributes to entities at search time. Of course, no one says it like that; they say “we’re bringing updated data into our visibility tools.”

There’s a dirty secret in those tools though. Actively mapping attributes to entities entirely at search time is a hard problem to scale, and it gets even harder to do if you want to maintain that awareness into past records as well as the present. Few systems can handle “this was SVR42 before Tuesday, now it’s SVR69”. Add in that behavior has changed and the old model is still good for old records but a new model needs to be started, and most tools give up and start a new entity record. Sorry administrators and analysts, here are the tools for pruning stale entities from the system, good luck!


And so a sea change: what if that whole set of reality based problems is outsourced, and the organization uses ephemeral virtual devices based on static configurations to perform its tasks? Amazon and Microsoft still have to worry about physical hardware, but the rest of us can just inject prebuilt software bundles into a management tool and let the load balancers figure it out. As long as logging is done properly and auditing can still be supported, this can be a great answer. The unpredictable nature of this world has precipitated a tsunami of heisenbugs, but unifying development and operations reduces the lag time for diagnosing those. Furthermore, the attribute to entity relationship really doesn’t matter; who cares what address or hostname a function was served from? All that matters is service level objectives and agreements: success, failure, completion time, and resource consumption. It’s a pretty ideal solution for anything where the entity is disposable: simply stop tracking it at all, and use temporary search time relationships based on the functions that were served to maintain visibility.


Although... that requires the analyst to know what they need to track up front. If the image doesn’t issue enough data attributes to answer a question, you’re out of luck. That’s annoying for internal visibility, but the internal folks aren’t the only ones asking questions. A hypothetical: there was an instance on Tuesday, let’s call it EPHEMERIDES. Interpol would like to know what it was doing at 10 AM UTC because it was apparently exploited and used for evil deeds. Or maybe not? Who knows? In the long-lived server world, we would have been dumping all output into a central system and could sort through it on demand, but now we just know that it was doing its intended job within acceptable parameters. That’s all we’d decided to monitor. If we’re not proactively tracking the organization’s activities from its infrastructure, we’ll have to track something else to achieve visibility. Why bother? Well, let’s talk about how you’re going to prove compliance with data privacy regulations or due diligence security assurances when you can’t say what happened where last Tuesday. “Trust us, we’re pretty sure it didn’t do anything bad in the few hours it was alive” may not wash in court. An easy solution is to dump whatever you can from these devices into the cheapest storage possible, with some index-time identifiers to make it hopefully retrievable later. And if that’s not possible? Oh well, at least we tried and the fines will probably be reduced.

* Top left is the legacy, revolution against the mainframe. It’s servers as pets, deploy then configure thinking.
* Bottom left, legacy incremented, insufficiently.
* Bottom right is the future, servers as cattle, configure then deploy thinking. Revolution against the Wintel and Lintel server world, of course.
* Top right, the future incremented, insufficiently.

Hopefully this has been fun and useful!
Posted by jack@monkeynoodle.org at 8:02 AM

How to manage a Proof of Concept 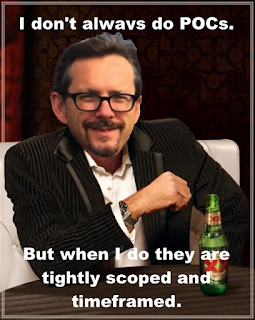 POCs as a concept are a response to customers getting oversold. As a vendor we’d rather skip the whole thing and trust our sales team to scope properly. As a customer we’d rather not spend time testing instead of doing. Sometimes they have to be done though, and it’s best for everyone to do it right. Right = tightly scoped and timeframed.

An ideal POC should look like a well-planned professional services engagement. The goal is established in writing before anyone gets on a plane. Infrastructure testing and go/no-go call Friday. Fly Monday. Kick off meeting Tuesday morning, installation rest of day. Wednesday and Thursday, go through the list of use cases and check them all off. Friday morning meeting to get the verbal, fly home, spend the next week with procurement instead of kicking the tires.

You should spend more time helping a customer or vendor define use cases up front than you allow for the POC.  If they can’t define use cases, you might still have a deal, but you’ve established that the product is not worth any actual dollars. That’s bad for the vendor obviously, but it also means the customer can’t get any internal attention for this project. Real use cases mean business value mean time and money allocations. If there is demonstrable value, there is easy justification for a fair price.

Given my one week frame, you’ve got a maximum of 16 hours for use cases. This is a bit more time than a circa 2018 Nicolas Cage binge. If it can be remote, great! Travel time can turn into work time for a maximum of 32 hours. That’s a play through of Far Cry 5. Planning ahead of time lets both sides think about how long each step will take. Estimate how long each use case will take to demonstrate, then double or triple that time. If you don’t need those hours, you’ll have time to get creative after the real work is done. Both sides should bring a punch list of extra things they’d like to show off or see.

This ideal model can have a couple of interesting wrinkles based on product maturity though. A young company with a single product has a straightforward agenda, but a mature company with many products on a shared platform has to pick and choose. Marketing being what it is, the customer’s excitement is also centered on the newest, highest-risk stuff! The reality is that these are things that haven’t been done before, at least by the feet on the ground, so they take even more time.

The only way to be successful in that case is to compartmentalize the platform use cases from the new shiny use cases so that you’re using the new stuff on a solid foundation. Everyone will be thankful in the end.

One last note on why this matters to customers; I’m describing the approach of quality field personnel, which is specifically intended to cast a product in its best light. This is good for customers because it makes the sale easy to explain and process. However, this is how a pro sales team gets their crap product over the line to beat out weak sales teams with potentially better solutions. If you care about the quality of the solution you’re going to be living with, it’s in your interest to understand and manage the POC process.
Posted by jack@monkeynoodle.org at 4:50 PM